Blind Skiing on the Slopes of Sauze, Italy by Eeshma

Blind Skiing on the Slopes of Sauze, Italy

How do you feel about skiing? Are you a champion skier, gliding gracefully down those slopes every December? Or maybe you, like me, are a complete novice, whose idea of a good winter holiday is more a mountain of food by a warm fire than flinging yourself unceremoniously down a mountain of snow. And so, it was to my very great surprise and to my family’s complete shock that I found myself along with a dozen 18-29 year olds on this VICTA/Seable trip. All of us were destined for the ski slopes of Sauze d’Oulx, a charming village nestled in the Italian Alps. Our only commonalities being our visual impairment and our appetite for adventure. 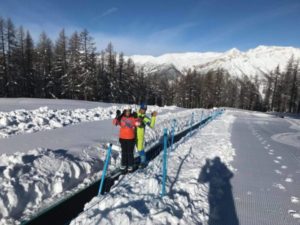 At the Thistle Hotel, Heathrow Terminal 5, amidst the thrum of newly minted conversation and warm chocolate brownies, we were introduced to our tour guides for the next week. For those of you new to the scene, VICTA is a charity which caters for the needs (both social and otherwise) of young visually impaired people and which often works with Seable Holidays (a social enterprise and travel operator for disabled travellers). Between the two organisations, we had four dedicated sighted guides as well as a number of others in the group who could see enough to assist. Itineraries discussed, icebreakers exchanged and ground rules established, we all went to bed promptly in anticipation of our unseasonably early flight on Tuesday morning.

After a blissfully short flight to Geneva and a bus journey through rolling, snow dappled alpine vistas, we finally arrived at Villa Cary, our hotel. More B&B than sprawling resort, we found to our delight that we had almost free run of the place. After a filling but touristy meal of a full English brunch, we retired to our rooms for a spot of sleep before reconvening at the hotel bar for dinner. Food came in the shape of a typically Mediterranean three course meal which left us full to bursting and ready for bed once again.

The next four days followed more or less the same pattern minus the continual urge to snooze. After a breakfast of bread, cheeses, spreads and meats, we spent our mornings on the pistes skiing with the help of one-on-one instruction from an amazingly friendly and competent team of ski instructors, whom we all got to know on a first name basis.

Following an initial assessment, we were divided into groups according to our skiing expertise and took it in daily turns to do repeat rounds of the nursery, blue and/or red slopes. Some serial skiers in the group chose to return for some more skiing in the afternoons.

It is fair to say that sun burnt and windswept though we undoubtedly were, each one of us improved in our stamina and skill over the course of the trip. Some of us by progressing to another slope, others by independently learning to stop, slow down and turn, and others still by simply conquering their fears of the piste enough to relax and enjoy the adrenaline that comes from controlled descent.
For me, victory came in the entirely unflattering but completely honest observation of one of the instructors who informed me blithely that I must have improved, given that I was no longer so taut with nerves as to resemble a “penguin”!

For those of us who chose not to ski in the afternoons, free time included going sledding or to a local spa for massages, gym, facials and an enticing array of other treatments including Turkish baths and the exotic sounding Lomi Lomi.

Evening meals included in our hotel stay were all served in the hotel’s bar-restaurant area. We made friends with the waitress and chef who were always happy to take requests and recreate our favourites from a few days before. A surprisingly diverse group of individuals, we all bonded over the leisurely dinners peppered with self-reflection and tired contentment as well as the card games and competitive team quizzes which followed. 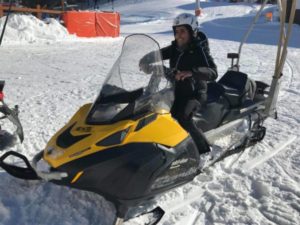 As is the way with all good things, we were sorry on Sunday morning to have to wave goodbye to the quaint cobbled streets of Sauze, its beautiful snow-capped slopes and even our high-vis florescent orange t-shirts which declared to the world in no uncertain terms that we were ‘blind skiers’. Bundled up warmly against the chill, we took a transfer back to Geneva where the promise of a swanky hotel awaited us.
Highlights in Geneva included chocolate shopping and in particular, a mammoth 4.5 kg Toblerone (the size of a small toddler), meltingly delicious Gruyère and Emmental fondue, crispy potato Rösti and the lightest of mascarpone pizzas. After a general meander around the strangely quiet and orderly streets festooned with a muted, civilised sort of Christmas cheer, we headed back to the hotel to get ready for a sumptuous dinner. We were treated to a Swiss pick and mix of the best of Italian and French cuisine, from tartars, risotto and steaks to pasta.
We returned to England on Monday exactly one week later, better friends and less floundering skiers than we had left it. Each of us glad of the opportunity and already planning our next potential VICTA/Seable experience.

As for me, how do I feel about skiing now? Good enough to want to try it again, this time head held high, shoulders bent with intent, feet arched snow-plough like and stomach firmly concave.